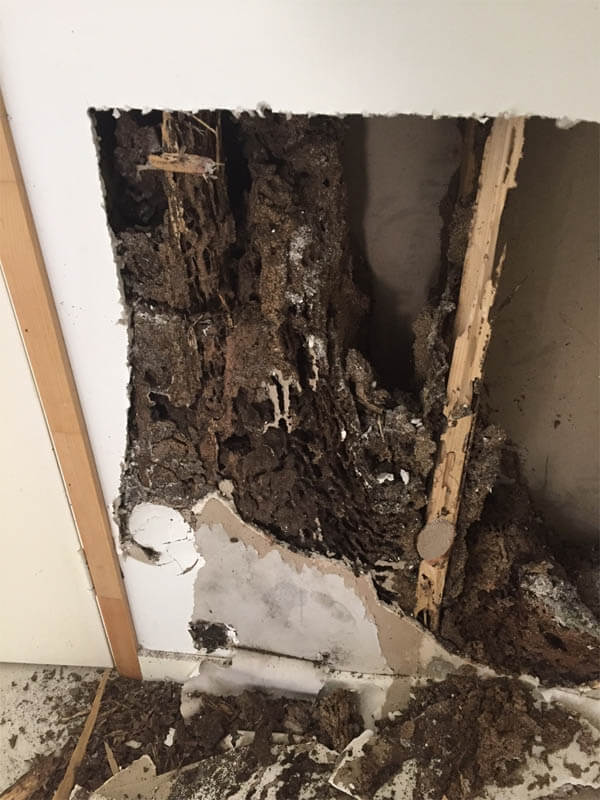 While out on a job this month a customer from Worongary rang and insisted they were having some termite issues. After a thorough termite inspection it was confirmed that a termite colony had moved in to one of the walls and a fairly large nest had been established in there.

There was significant damage throughout the house. Even some trusses in the roof were damaged and would require a builder to assess and quote on repairs to make the house safe again.

We treated the nest and revisited to make sure the treatment had worked. Luckily, we were successful and that allowed us to do some further investigation.

With the owner’s permission we removed the plaster from the walls in the affected area and found a massive Termite nest. Probably the biggest one I have personally seen for a few years.

We removed two wheelbarrow’s full of mud from a wall cavity.

The termites were attracted by a small leak in the shower area and had tracked approximately 8 meters from the back of the house through to the leak and wreaked destruction all the way along their path.

All this could have been prevented had the owners had their annual Termite inspection done by Dan Purkis Pest Control.

Australian standards state that your house should be inspected every 12 months. This does not stop termite entry but will minimise the damage they can do by minimising the time between inspections, allowing us to catch the problem before it becomes a massive one like it has been in this case.

Alternatively a preventative barrier or baiting system could have been put in place in order to stop the termites ever entering in the first place and therefore a warranty could cover any unfortunate incident if they happened to get past the system.

What our clients say